Hello, yes your eyes are not playing tricks on you! I am back… for now. It has been a tumultuous year – I recently lost my dad and as an only child that has been fun to deal with… (not). But 2020 has happened and life hasn’t gotten too much better but hey! That just means reading a book and escaping into another world is so much more inviting! My pre-Christmas gift to myself was JoJo Moyes’s Giver of Stars. Side story – when I went to the London Book Fair, I rested my weary feet in one of the presentation areas whilst it was empty… a few minutes later it filled up and JoJo Moyes walked on to the stage and discussed how she got into writing books. Never been more happy to have sore feet!

Time to get stuck into this bad boy by @jojomoyes. You know you work in publishing when you drool over the cover, wiblain and end papers of a book! #thegiverofstars pic.twitter.com/zDXewkVM20

We meet our young protagonist, Alice, as she is wooed by an exotic American who takes from her stuffy, upper-class, English Family on an extoic adventure to the mid-west of America. Alice finds herself in another ‘cage’ of a family and struggles to adapt to the middle-upper class American families she finds herself in.  She finds herself accepting an offer at the local church to become part of the packhorse library, taking books to the far corners of the village where it is difficult to reach. Alice falls in love with the ladies who she becomes friends with and finds that she has found her place in the world, if it weren’t for her pesky husband and his awful Father who run the nearby mines. Think legal slave labour and you’re nearly there with their methods for running them.

Alice’s new friend and boss, Margery O’Hare, doesn’t really care what people think of her but she has a loyal group of friends and she always does right by people. Though many tarnish her with the same name as her father. Margery finds herself on the wrong side of Alice’s father-in-law and madness ensues.

I loved this book. I love to read and my career is in publishing and I was also a library assistant as a teenager so this book is almost a love letter to me! The characters are well rounded and all have an interesting backstory that I wouldn’t be surprise of Moyes goes and writes a few prequels or sequels with some of the other characters. The main story line flows nicely and there are a few surprises along the way. It has a strong feminist message but also one of the importance of education and reading can have for women and the general population.

The slight downer is the rumours of plagiarism from Moyes from the author of The Bookwoman of Troublesome Creek but I liked it that much I bought the audio version for my grandma! 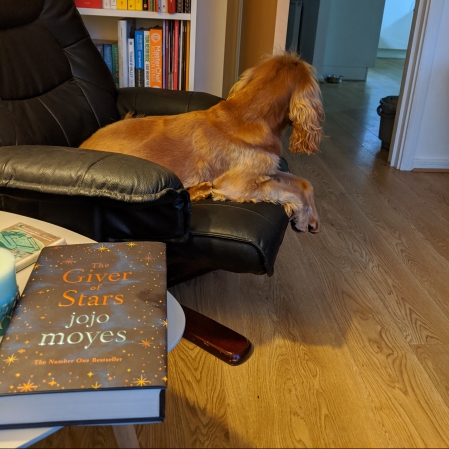