I have decided to review all four books as one. This is because I find the saga as a whole difficult to analyse. Twilight is a phenomenon but why? Don’t get me wrong, I do have a fascination with them and read the whole series more often than I care to admit. I also read these books before they were the phenomenon they became (the perks of working in a library). The storyline is intoxicating and uses a tried and tested topic. Vampire stories have always been popular since Bram Stoker’s “Dracula”. Our fascination of the undead can be chartered throughout literature, whether it be Mary Shelley’s “Frankenstein” to Elizabeth Kostova “The Historian”, Vampires and Monsters hold our attention. Mayer has drawn on that and I feel that it wouldn’t take much writing ability to make it a story people would happily want to read. It isn’t a subject matter that has to engulf you fully to make you want to carry on to the bitter end. Having said that, Mayer obviously got something right to keep us intrigued and glued to the pages.

In “Twilight” we meet Bella, our heroine. She is leaving her desert home of Arizona to the rainy, green land of Forks. Here she now lives with her father, the local sheriff and attends the town public school. This is where we first meet the Cullens. An extraordinary family. They are all intelligent, beautiful and have golden eyes. The youngest boy is in Bella’s science class and she seems to cause a very strong and powerful reaction within Edward Cullen. So much so that he tries to change his classes so he is never with her and then does not return to school for numerous days. When he returns, he seems much more amiable to Bella, though he does warn her away. We later find out why as Bella discovers his secret after talking to the local Native Americans and her childhood friend Jacob Black. The answer is simple, he and his family are actually a coven. A coven of Vampires. The rest of the book goes on to describe how Vampires came into existence  how the Cullen family came to be and shows the growing love that Edward and Bella have for each other. It ends on a battle of Edward and a stranger vampire fighting for the right for Bella or rather, the right to keep her alive or drink her blood.

“New Moon” begins barely after “Twilight” finishes and Bella’s birthday causes alarm as she suffers a paper cut in the middle of a Vampire Coven. This causes Edward to re-evaluate his relationship with Bella and makes him leave her for her own good. Bella is heartbroken and takes comfort in the friendship she has in Jacob Black. However, this friendship is also fraught as a Vampire called Victoria vows to kill Bella for Edward killing her mate at the end of “Twilight”, meaning the Quileute children become shape-shifters who take the animal shape of a wolf. Jacob joins in this pack and we have Bella once more involved with dangerous creatures. Edward believes Bella to be dead (due to a prophecy of Alice and pig-headedness of Jacob) and tries to commit suicide by revealing his presence in the home town of the Volturi (Vampire Elite and police). Bella and Alice race off to Italy to rescue him, in the process revealing  Bella to the Volturi.

“Eclipse” again begins a short while after its predecessor and we see Bella forcing Edward and Jacob to accept that they are both important to her and that they are both in her life. Hard as they are sworn enemies. However, Victoria is back and this time making an army of new-born vampires to try to kill Bella. The Quileute wolves and Cullen vampires join forces for the first time in history to destroy this invading army and save Bella. Bella asks Edward to changer her into a Vampire but Edward will only allow her to be changed by him if she agrees to marry him first. He was after all born in a different era where virtue was honoured.

“Breaking Dawn” could easily be two books as the two films based on it show. The first half we have the wedding, honeymoon and Bella’s pregnancy and the second half we have Bella being a newborn vampire, Renesme being seen, building up an army of witnesses and the Volturi descending on the Cullen family.

As I mentioned briefly above, I am not fully convinced by Mayer’s writing ability after the Twilight Saga (However, “The Host” proves she can for me). I wasn’t enthralled by the prose of Mayer. Some of her writing is confusing and didn’t always make sense. The problem could be due to her writing from a 16-year-old perceptive. Her dramatic improvement in writing for her book “The Host” suggests that this might be the case. This doesn’t reprieve it though. Many books can be written from a teenager’s point of view or 1st person and still be well written. Writing prowess aside, this book has the ‘X-Factor’. Maybe that Edward is just so darn romantic or that Jacob is your best friend turned hot boyfriend type that we are kept entertained or the fascinating friendships and relationships that take you on a roller-coaster, Twilight has something. You are invested in each of these character’s lives and whether it be the romantic triangle (Team Jacob by the way) or the bonds of loyal friendships, Mayer has stumbled on to something great. All in all one great storyline that keeps you for 4 books and one you can re-read.

My verdict is 8/10. Worth a read though I don’t believe the films do the books any justice and I prefer to keep the characters separate in my head as Pattinson and Stewart just aren’t my idea of Edward and Bella (I know I shall be stabbed by many Twihards for the Pattinson comment!). 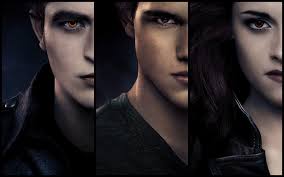