As you do when you have a blog, you look at other people’s blogs. I stumbled upon The Infinite Power in 26 Letters. This blog is quite interesting. A book review blog and more. I stumbled across one of the posts and it was recommending YA fiction series’. From the previous reviews on here, you should be able to surmise that I am a big YA fan. The Hunger Games Trilogy, Beautiful Creatures, Twilight, Harry Potter are all great YA novels. So when I saw this post I decided to follow it’s advice and read some of its suggestions. One if these was the Legend Trilogy by Marie Lu. Brilliant suggestion. Read all three in two days!

We start off with Legend where we meet Day and June. The most wanted boy in the Republic of America and she, the golden girl of the Republic. It seems there is a plague affecting the poorer sectors of Los Angeles. Obviously not  very good, especially as we see Day’s home being marked as a home of the plague. Day decides to try and save his brother from the plague so breaks into the local hospital to steal some of the  plague medicine. However, here we run onto trouble. Whilst escaping, a guard follows him and Day throws his knife into his shoulder and makes his escape. This turns out to be a catalyst for the rest of the series. This man happens to be June’s brother and it seems Day’s throwing ability is off. Metias is now dead and a grieving June is taken from school and given the task of tracking down Day and bringing him to the authorities.

Prodigy starts us off where Legend left. June and Day are now on the run with Day’s brother held in captivity and being tested on. They run to the rebellious group of the

Patriots, apparently funded by the Colonies. Here, in Las Vegas, they agree to help the Patriots in return for fixing Day’s leg which became injured during their flight from LA. June’s mission is to return to the Republic and try and befriend the new leader and Day is to rally the citizens and ultimately kill the new leader. However, June realises that the Patriots are wrong and her and Day turn on the rebels and again are fleeing for their lives. June catches some unknown disease and Day saves her by taking her to the Colonies. Whilst staying there, they realise that the Colonies are just another form of  a suppressed people and would be no better a rule than the republic. June and Day make it their destiny to help change the republic for the better and to do this they must return and throw all their support behind the leader. 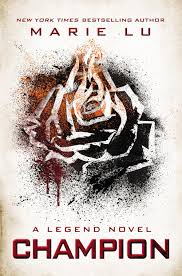 In Champion we have June as the golden girl once again. She is now an advisor of the Elector and Day is trying to find a cure for his terminal illness. The Colonies decide to try and invade the Republic whilst it is still relatively weak with a new Elector and rebellious citizens. This calls for June to ask Day for permission to use his brother against a new plague that the Colonies seem to have and blame the Republic for. Of course, due to his own history of being a lab rat and the more recent experiments on his brother, he denies this request but does promise to help in anyway he can, despite his failing health. June discovers this medical ailment and realises it is the reason behind his sudden departure from her life. She also realies that Day can never truly forgive her for her part in the murder of his mother and older brother and it kills him to be in love with her. Day sacrifices himself to save the Republic against the Colonies and ends up with memory loss. He remembers certain people but not June. Should she stay with him and help him remember her? Or leave and takeaway the pain of loving someone who helped to kill your family?

I really liked these books. Like I said above, I read all three in two days. It is a dystopian reality with a love story at its core. Similar to The Hunger Games it is a scarily realistic future that could happen to us. With the melting ice caps, the world would change indefinitely and who is to say that this future is not a possibility?

The connection between all the characters is fantastic and you believe them all. I was shocked by one of them as I didn’t see that relationship revelation at all. Maybe I am just naive. Or it was excellent writing. The writing throughout is flawless and really brings you into the story. Having said that, I’m unsure as to whether I like the ending. I think I do. It is definitely better than The Hunger Games ending which if you have read my post on that then you shall know my thoughts on its disappointing finale. So it is good but just not what I thought would happen.

All in all a great read. It made me regret my speed in reading as this meant I had finished them too quickly. My verdict: 9/10. Give it a go!